Today I am giving my poor left fingertips a rest. The previous times I tried to learn the banjo, I generally played too much the first few days and actually did myself some damage. This time I’m going to start slower and give myself time to develop callouses! I’ll just do a little right-hand practice on the open strings today.

In the meantime, here are a three photos of my number-one audience. Notice how he relaxes little by little: 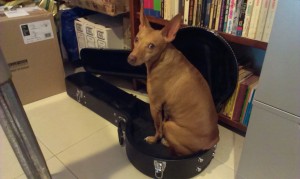 In case you’re wondering, his name is Brown, and he’s a podenco andaluz, which translates to something like Andalusian hunting dog. My wife and I found him abandoned in the country and adopted him. He is terrified of firecrackers and other sudden loud bangs, which may be why his previous owner (presumably a hunter) dumped him. Brown can stand my banjo playing for at least a few minutes before he has to leave. (He never much liked my trumpet playing.) With such sensitive ears I think he has potential as a musician, or at least a critic.

If you want to know my level of banjo playing, feel free to listen to my attempt at creating some chord melody, recorded three days ago. I know you’ll be kind — you know I’m a beginner, right? 🙂 The piece is “Jacob’s Ladder”, from Mel Bay’s Music Pocketbook for tenor banjo, where it is printed in lead-sheet style, with just the melody line and chord symbols:

Sorry about the sound quality. I recorded it on my MP3 player. When Deutsche Grammophon offers me a contract they’ll probably want to use their own recording equipment. 🙂